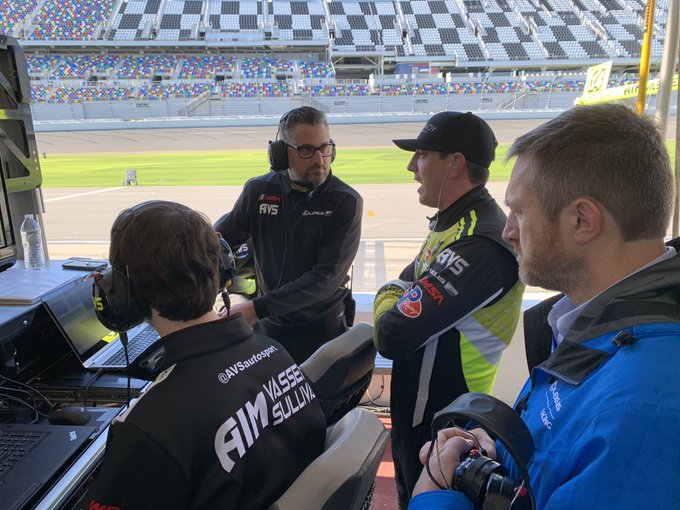 (IMSA)—In his final media availability of IMSA's Roar Before the Rolex 24 at Daytona International Speedway, reigning NASCAR Cup Series champion Kyle Busch discussed the differences he has experienced in braking and passing etiquette during his weekend in a sports car.
And in a light-hearted moment, also fire suit pant cut.
While being asked about the ribbing that his teammate in the No. 14 AIM Vasser Sullivan Lexus RC F GT3 Jack Hawksworth doled out, Busch said the other drivers’ fire suits “looked like underwear, long johns,” whereas his looked like “a pair of pants, I’ve got the regular boot cut…NASCAR-style.”
“Theirs are all wrong, mine’s right.”
When it got back to the more serious matter of differences in racing between NASCAR and IMSA, Busch brought up a couple of “interesting” moments on track while navigating traffic.
“I learned from Jack that correct road course driver etiquette is to not ever be on the outside of another guy ‘cause they’ll just force you off,” Busch said. “He was actually quite entertained when he ran his NASCAR race at Road America last year that guys would actually give you room on the outside of the corner and not just throw you off on the dirt.”
The challenge of passing similarly paced GT cars while staying out of the way of fast-approaching Daytona Prototype international (DPi) cars, all while still maintaining consistent lap times, is one that is not lost on Busch.
“Interesting moments like that that are going to play out the whole time in the race,” he said. “You have instances in which you’re faster than the guy in front of you, and just barely because it’s a class car, and you’re trying to pass that guy…but you have these other guys coming and blowing your doors off on some of these corners, that you basically have to forfeit. You can lose a lot of time in doing those things.”
Busch also indicated that he’s still learning the braking – as his NASCAR Toyota Camry carries a great deal more weight than the IMSA Lexus RC F GT3, which also has ABS braking that is lacking in the stock car. Throughout the weekend, he felt he started to get a better grasp on the limits in the corners and gained consistency each time out.
One additional surprise came in the visibility on the track during the only night practice session Saturday evening.
“What do you even need the headlights for? There’s plenty of light,” Busch said. “I raced local short tracks, some of them dirt…and there wasn’t very much light at those places.
“It seems as though my eyes still work OK.”
Busch will return to Daytona later this month alongside co-drivers Hawksworth, Parker Chase and Michael De Quesada for the 58th Rolex 24 At Daytona.