Heroes: A Look Back At The Life Of John Cooper Fitch 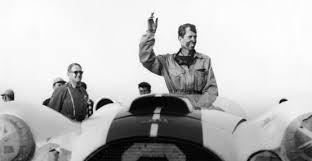 John Cooper Fitch was part of the team who founded Lime Rock Park. He was a race car driver, an inventor and a war hero.

During World War II, he volunteered to become a pilot for the United States Army Air Corps. His service took him to North Africa, where he flew the A-20 Havoc and then on to England. By 1944, Captain Fitch was a P-51 Mustang pilot with the Fourth Fighter Group on bomber escort missions, and became one of the Americans to shoot down a German Messerschmitt Me 262 jet fighter. Just two months before the end of the war, he was shot down himself while making an ill-advised third strafing pass on an Axis train and spent the rest of the war as a prisoner of war. Upon returning home, he received a Purple Heart and a POW Medal for his wartime service.

Once home, John began his sports car racing career, which spanned 18 years and earned him many titles in the U.S. as well as Europe. In fact, he was the first American to race automobiles successfully in Europe in the post-war era. Fitch won such notable sports car races as the Gran Premio de Eva Duarte Perón – Sport, 1953 12 Hours of Sebring, 1955 Mille Miglia (production car class), and the 1955 RAC Tourist Trophy, as well as numerous SCCA National Sports Car Championship races. He was also involved in Briggs Cunningham’s ambitious Le Mans projects in the early 1950s, and was later a member of the Mercedes-Benz sport car team. He also competed in two World Championship Grands Prix. After retirement in 1964, Fitch was the manager of Lime Rock circuit, and a former team boss of Chevrolet's Corvette racing team.

As a car designer and inventor, he designed a total of five cars, consulted on track design (such as Lime Rock Park), and motor safety mechanisms, which has helped save countless lives. In the aftermath of the Le Mans disaster of 1955, Fitch devoted a great deal of

effort to the task of increasing the safety of motorsports and driving in general, resulting in his company, Impact Attenuation Inc. His innovations were characterized not only by their effectiveness, but also by their real-world practicality, as affordable and easily installed and maintained solutions. Inspired by sand-filled fuel cans which he used to protect his tent from strafing during the war, he devised the Fitch Barrier system, now ubiquitous on American highways, for installation around fixed objects on racetracks and highways to absorb impact. Typically, Fitch insisted on testing the system himself, including tests at Lime Rock Park. Since first being used in the late 1960s, it is estimated that they have saved as many as 17,000 lives.

At age 95, Fitch passed at his home near Lime Rock and his headstone rests at the nearby cemetery at Trinity Lime Rock Episcopal Church.